STORIES BEHIND THE PATTERNS - DISCO BALL 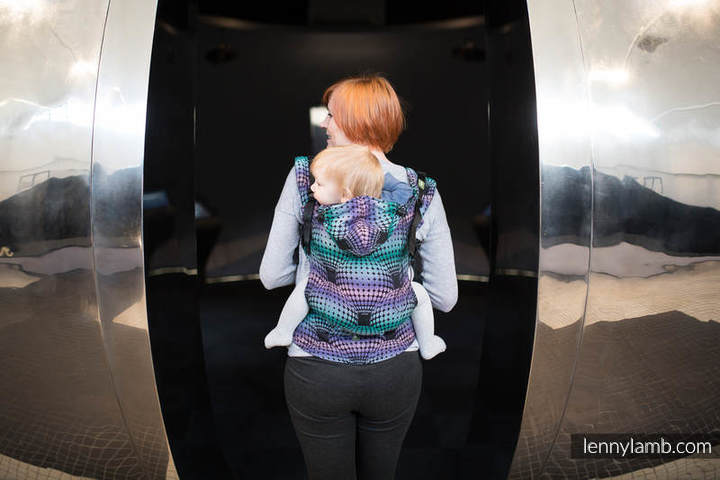 If you look closely at the Disco Balls – you’ll notice that in this geometrical pattern the major role plays the interaction of colors. The illusive effect of the ‘swelling’ is made by the play of the color and the shape which deceives your eye. You may even want to touch it to check if the pattern is really volumetric or not.

This happens because this pattern has a lot in common not only with disco balls from the real life but also with art, namely the Op-Art. ‘Op-Art’ is a shortcut from ‘optical art’ – a style in the contemporary art that uses the optical illusion to make a special visual effect.

The ‘father’ of the Op-Art movement is Victor Vasarely who created his first illusive masterpieces in 30-ties and 40-ties. However, the term ‘Op-Art’ was used for the first time years later - in Donald Judd’s review of the Julian Stanczak’s exhibition. It was popularized in 1964 in the article in the Time Magazine. Best years for the Op-Art movement were 50-ties, 60-ties and 70-ties, with the huge exhibition in 1965 called The Responsive Eye which took place at the Museum of Modern Art in New York and included 123 paintings and sculptures of artists who soon became the icons of the style: Victor Vasarely, Bridget Riley, Richard Anuszkiewicz, Julian Stanczak, Frank Stella, Carlos Cruz-Diez, Joseph Albers and many others. Op-Art masterpieces are still highly appreciated by the collectors and some of them may be sold for hundred-thousands of dollars. Op-Art works are abstract, using limited but carefully chosen colors and shapes which interact dynamically. First Op-Art artists even used black and white only because they make best, ‘pure’ contrast! Other painters studied deeply the interaction of colors. The emphasis in the Op-Art works is put on the perceptual effects: the impression of movement, space, vibration or even hidden patterns.

The fascination by the optical phenomena makes the Op-Art artists successors not only of the modern abstractionists but also – of the Old Masters who invented the trompe l'oeil (fr. ‘deceive the eye’) paintings, as well as nineteenth century theory of color. The Op-Art works sometimes have poetic titles which drive the viewer into another, symbolic, interpretation.

You can find optical effects in other LennyLamb patterns too such as Illumination which uses color and shape to create an illusion. Not everyone knows that many of the Op-Art masters, such as Wojciech Fangor, Richard Anuszkiewicz or Julian Stanczak, had Polish origins – just like LennyLamb!

Stories behind the patterns - Paisley

HOW TO USE A RING SLING

Some babywearing tips from LennyLamb

Does your wrap come from a true weavers studio or from the manufacturer that just sources the fabric?

Which fabric is the best for a baby wrap and carrier?